The Best Shot – Tim Gunn speaks to Hong Jiang, COO Aegis Life, and Luigi Aurisicchio, CEO Takis Biotech, about how their tech could be an improvement on current vaccines 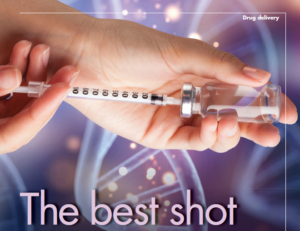 Did you think it was over? Just for a moment, maybe – as the vaccination numbers rose, or the mercury; when the lockdowns lifted; as the masks dropped?

The validation of Covid-19 vaccines will go down in history as a turning point during this pandemic, but with highly specific storage and transportation requirements, the roll-outs that followed have been anything but straightforward. The arrival of DNA vaccines could help solve some of those issues, while delivering a host of other benefits. Tim Gunn speaks to Hong Jiang, COO of Aegis Life, and Luigi Aurisicchio, CEO of Takis Biotech, to find out how their technology could be an improvement on current vaccines.

Excerpt … [Aegis Life] is positioning its Fusogenix platform as a true ‘second-generation’ LNP-based gene delivery technology for getting DNA to its target without any extra tools. Whereas Pfizer and Moderna’s LNPs deliver their payloads thanks to ionisable cationic lipids that assume a positive charge (and therefore become toxic) in contact with cells, Aegis Life’s incorporate a fusion protein like those that occur naturally on viral vectors – only much smaller and stealthier.

“We like LNPs,” says Jiang. “They have nice properties to encapsulate payloads and are much more flexible than viruses, but, with the positive charge on the surface, they basically barge into the cell by knocking down the door. That creates collateral damage and toxicity.”

In the terms of that metaphor, viral vector vaccines use fusion proteins to carefully pick the locks on cells – not causing any harm, but leaving just enough evidence to convince the immune system to upgrade its security. Contrast Aegis Life’s fusion-associated transmembrane (FAST) protein – the only known fusion protein that doesn’t cause immunogenicity: it enters cells with a skeleton key.

As a result, the Fusogenix platform can be used to simultaneously deliver multiple genetic payloads (whether RNA or DNA) intramuscularly, systemically or orally – over and over again. Aegis Life has also found that, because its DNA survives and functions inside cells for two to three months – compared with the couple of days that injected mRNA takes to degrade – it can be used for single-shot vaccines without compromising the immune response.

Like all the approved vaccines, Aegis Life’s first formulation, which is moving into phase II trials, targets the spike protein. Following it up the pipeline, though, is a vaccine that delivers DNA encoding for the spike, envelope and membrane proteins. As almost all coronavirus mutations affect the spike protein, vaccine delivery systems that can multiplex in this way are likely to be variant proof.

“What we have, potentially, is a vaccine that only requires one dose, and that can be shipped at room temperature or in a refrigerator,” beams Jiang. “At room temperature, it will last for a month; and in a refrigerator, it will last for a year. It’s cheap, it’s easy to distribute and it only requires one shot. That’s what we think the world needs right now.”